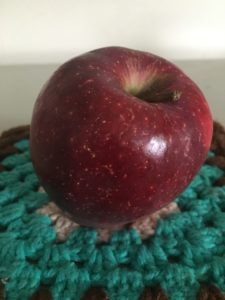 No, not the computer!  No, not the fruit that most people think Eve ate! (Which, by the way, the Bible does not name the fruit that she ate.)  But, instead, the apple that doesn’t fall too far from the tree.  Do you have children that didn’t fall too far from you (the tree)?  When your children get their traits honestly (that is, from you), there should be no complaints you can make.  You know, they say or do some of the same things you did when you were growing up, or maybe even still do as an adult.  When they were growing up and did things that resembled you, it was cute.  Now that they’re grown-up, it’s not cute at all!  As a matter of fact, they’re so much like you, sometimes it makes you angry.  Especially if they have taken on your bad habits.  You see that same something in them that you dislike about yourself.  As a result, you have caused your children to become distant.  You became harsh towards them.

Now what do you have?  A relationship broken!  You want to do something about it, but don’t know what.  It would be so refreshing and therapeutic for you if you received words from your children, like the following from Hearts-R-Mending:

Now that I’m all grown up
And started a life of my own
I can finally face you again
Since leaving the pain and hurt alone.

But let’s put all that behind us
And keep looking straight ahead
I’m willing to extend myself
By extinguishing  the fear and the dread.